Area of Production: Region: Veneto. The vineyard ” La Pra ” is located in the classic hilly area on the eastern shores of Lake Garda. Recently, some ancient medieval wine jugs (wine jugs in Italian means le olle) were discovered intact during some excavation in this vineyard. The wine jugs are now exhibited in a venice museum where they continue to provide a glimpse into the ancient history of both our vineyards and our wine.

Grapes: Produced in limited quantities from red grapes Corvina (65%), Rondinella (25%) and Cabernet Sauvignon (10%). Grown on the vineyard ” La Pra ” (with 5000 plants per hectare) they are planted exclusively with the espalier-guyot system. The quantity produced is 7 tons per hectare.

Vinification and Production System: As soon as they are harvested (end of september), 70% of the grapes are immediatly lightly pressed, and 30% of the grapes are dried for a short period and lightly pressed. The fermentation of the must lasts 8-9 days at a controlled temperature of approximately 24°c. And with a daily delestage. Aged partially in oak butts and partially in thermoconditioned steel tanks. Cold bottling in sterile bottling line.

Bouquet: Delicate, fragrant and spicy, with hints of ripened fruit.

Serving Temperature: To be served at room temperature (18°C.).

Preservation: Can be aged for 3-4 years. Store in a fresh, dry and dark place.

THE HISTORY OF THE NAME OF THIS WINE

The name “LE OLLE” comes from the archaeological findings discovered during the renovation of our vineyard “La Prà” in Cavaion Veronese in 2000. At that time and in that place, a vineyard had already been planned specifically for the production of a new red wine, to be offered under the new DOCG “BARDOLINO SUPERIORE CLASSICO” designation.

While preparing the soil for planting the new vineyard, we found the remains of a small house and a water well, dating from between the Roman period and the High Middle Ages. While digging inside the well, we found some perfectly preserved ancient ceramic wine amphorae called “olle”, which can be dated between the fifth and sixth centuries D.C.

The hiding of objects inside a well was a typical phenomenon of the Roman and early medieval times, which was called “pottery in the well”. When the wine was created, it was naturally given the name “LE OLLE” and is the best confirmation of the wine tradition of our country, which is the basis for the production of this special red wine. 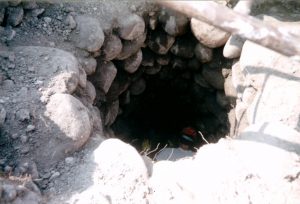